Apple’s Billion$ Datacenter Gets a Boss

Apple is till date known as a cool gadget company, but that seems to be soon changing. Apple recently acquired $46m rebates from North Carolina to set-up a $1bn datacenter in the state. This price is more than the state-of-the art data centers owned by Google and that questions what Apple wants to do with such a powerful data center. May be OSX is going to be hosted on the cloud ??

Anyways, today eBay's Olivier Sanche will join Apple as its director of global data center operations and manage all the data centers that Apple is setting up. Olivier Sache was one of the guys who created the great E-bay and Paypal Infrastructure before web services were the “in-thing”. Apple had realized the strength of internet-services long back with iTunes and iPhone App Store, but it has also failed many times as shown with .mac and MobileMe downtimes and lack of new features. Apple has internally done many experiments, but failed in consolidating it position on the web...

With Olivier in its team, Apple surely hopes that its web services woes will end... May be Apple’s planning a Search Engine to compete with Google. Isn’t that a reason why Google’s Eric Schmidt was asked to leave the Apple board ??

Although a host of online word processors have come up, OpenOffice has been the only real competitor to Microsoft’s Office Productivity Suite. It is widely regarded as “one day will beat Microsoft” dream for most open-source evangelists. It supports Microsoft Office formats and provides great compatibility to edit documents and presentations in Linux. Infact, its been one of the goals of OpenOffice to be like Microsoft Office so that people can easily switch to it and get the same features for “free”.

And moving in that direction, in the next release, they are planning to copy the Ribbon interface of Office 2007. The Ribbon Interface has been one of the most talked about UI changes, some people hate it while others love it. In Windows 7, Microsoft has moved some basic applications like Paint, Notepad to the Ribbon interface. May be OpenOffice is just trying to get ready for Windows 7. 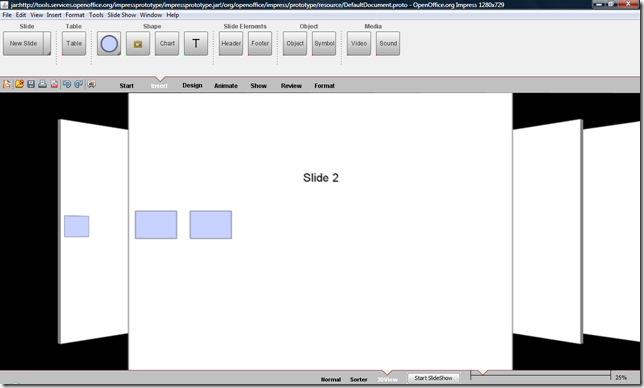 Posted by Saptarshi Purkayastha at 7:15 AM 0 comments 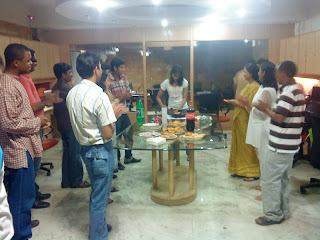 B'day celebrations at office. The interesting thing was 'tester' written on her cake... and that is why this one figures on my "Tech" blog!!
Posted by Saptarshi Purkayastha at 2:35 PM 0 comments

While the world’s managers and venture capitalists have lost faith in the “garage model” of business, I am still a firm believer that the best innovations come from individual efforts and not concentrated directional movement in large organizations. Today, was yet another day in the field showing how homebrew software has innovations that many large software suites lack.

Just to give a background on what I’m talking about - a product that I’ve been working on lately is a patient-tracking system for the National Leprosy Eradication Programme. Since DHIS2 is the widely deployed HMIS application in India and aggregated reports for the Government of India are generated through DHIS2, we needed some kind of patient-tracking, yet required aggregate numbers of these patients through DHIS2. For this purpose, the most ideal way we found out was using OpenMRS for the patient-tracking and then generating reports through DHIS2. Thus, we are able to create rich and generic medical records of a leprosy patient, which can later be used not just for leprosy patient care, but future medical treatment of the person for any other disease or health service provisioning.

But today when I arrived to demonstrate this system in Maharashtra State Health Society, I was pleasantly surprised to see a homebrew application. We finished our presentation on the system, demonstrated the application, decided upon pilot process, future meetings and the whole process before we can go live with the system state-wide. Just after we finished our stuff, one of the leprosy health officers told us that he had privately worked on something that was suited for the NLEP program. Most people just ignored his comment, but I was eager to see what he had developed.

And when I saw his application, I was very much stunned. A really nice and intuitive user-interface using Adobe Flex, neat use of data using good-looking reporting and visualization tools, basic reports using excel sheets and a neat-little data model, similar to the ideas in OpenMRS. Maybe the data-model is not suited to a medical records system like OpenMRS, but it very well met the requirements. From what I learnt, it was developed in about a month’s time by one developer, who happens to be the son of this medical officer.

“Commendable effort and nice design decisions”, is what I complemented the medical officer. But what got etched in my mind is that, some best software are written in “that car garage” on a single computer.

In a bid to bring together a network of international agencies working in the field health information systems - University of Oslo, NORAD, OpenMRS, WHO, HMN, Society for Health Information Systems Programs (HISP India), the National Health Systems Resource Center (NHSRC) has convened an “International HMIS Workshop on Integrated e-Health Architectures”. NHSRC, Delhi is an institution setup by the Ministry of Health to provide technical assistance to NRHM on various areas including HMIS.

We met in Goa from 26th to 30th July, 2009 and exchanged ideas on how we can build on integrated e-health infrastructure. Discussions ranged from what applications to integrate and different ways to inter-operate. Some were standard ways to interoperate while others were “not-so-standard” ways to interoperate. The most important thing was that everyone was part of the discussion and the next few weeks to months will be interesting to watch how the integration work goes forward.

The Gujarat state representatives: Mr. KK Panchal, Dr. Avashia and Sangeeta also presented their ideas on integration. I was pleasantly surprised that state representatives were for once clear about what they were expecting. Eventhough it was not very clear how, they knew what they wanted as the final product. They were also ready to bring the different parties (software-MNCs and government) together on the table for integration.

But for me what is more interesting was the way the participants shared their thoughts and philosophy of integration outside the domain of software and technology.

I have promised myself that I will be blogging atleast 3 times a week… and will be sharing a lot more of the thoughts that were shared in the workshop. A lot about what we have been working on and how we are planning to move forward in bringing a change in health informatics.